NBAA 2015 did not disappoint. In education, inspiration or deal making. Traffic among the thousand-plus exhibitors at the convention center and sold-out static display felt brisk and buoyant. The blue sky and idyllic temperature may have contributed to the overall optimistic mood, but I also felt momentum. People were not just tire kicking. They were doing business.

As a creative director, I pay attention to the way companies tell their stories. Display their wares. Draw you in. I learn as much from the bad as the good. Here, I’ll share insights based on outreach I found especially effective. For what didn’t work, talk to me in person. Aerospace Technologies Group (ATG) scored a homer with its brilliant futuristic, relaxation pods (used we’re told in the 2013 movie The Internship with Vince Vaughn and Owen Wilson). Curiosity drew you in. Comfort captivated you. Once you sat down on one of its three chaise-lounge-like chairs, a staffer closed the pod over your face and you happily viewed a short video of ATG’s offerings. From start to finish. It was a brilliant transaction. You gave your time in order to put your feet up. I have to think that future mentions of ATG will stimulate a sort of Pavlovian response. A subliminal, positive association. Great positioning for a company that aspires to be more than an aircraft supplier and craftsman, but a collaborator and leader. Someone you want to work with. 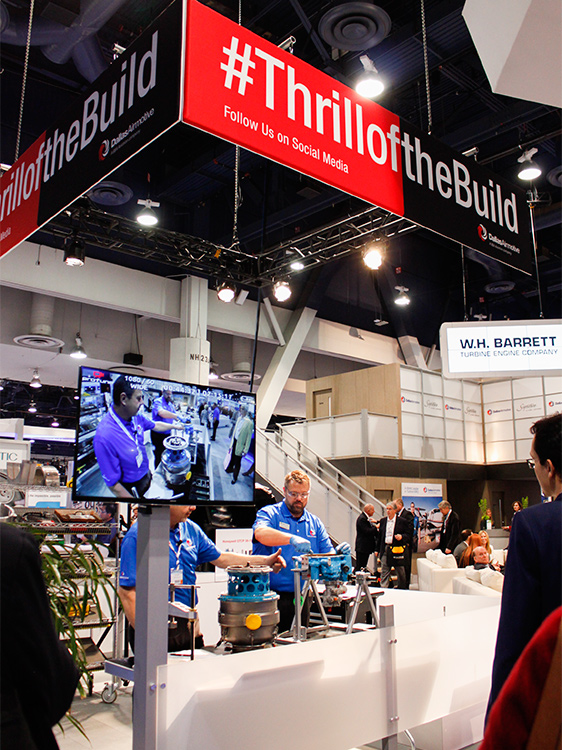 Showing trumps telling. Dallas Airmotive put its expertise on display again this year will a follow-up to last year’s Thrill of the Build. It changed up and added to the experience by having technicians provide a running commentary of their activities. And instead of doing a full PT6 engine overhaul, this go-round it demonstrated its worldwide, 24/7 mobile APU repair capabilities. Phillips 66 offered a selfie station with a slinky-gown, feather-headdress-wearing showgirl. You could share on Twitter or Instagram with the hashtag #P66AV as part of a dig-for-gold contest. We never walked by the booth without seeing people taking photos. Score.

A million dollars really hooks you. The Mente Group wowed the aisle with a big pile of money. If you snapped a photo and posted it online, you earned a chance to win an Apple watch. A fully outfitted guard added authenticity and showmanship. I always wondered what a stack of a million one-dollars bills would actually look like. Now I know and can share it with my friends.

SmartSky Networks used a virtual spokesperson named Sky to communicate the benefits of its new 4G LTE-based technology and what this blazing-fast air-to-ground network means to passengers and crew. From the number of times people stepped up and engaged with Sky, I’d say she did her job. Quite well. 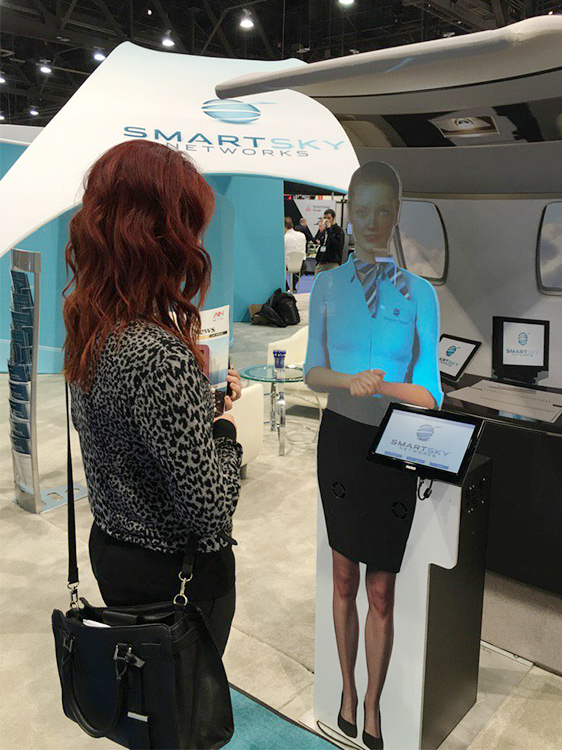 Jetex has only been around 10 years, but it makes a statement with its yellow, logo-as-a-wall booth. Simplicity stands out in the clutter.

Wichita got it right when it showed restraint in its booth. It features 14 partner companies, but asked each to follow specific design parameters so that the overall message could shine through for the greater good. The simplified palette, generous use of white space and succinct message help communicate Wichita is the Air Capital. Lufthansa Technik impressed our team first with an incredibly large and detailed aircraft model showcasing its VIP completions capabilities, but further won us over with knowledgeable staff who talked us through some of the intricacies of shaving weight off construction materials without sacrificing strength. Or beauty. All the OEMs leveraged supersized videos to showcase their products – and inspire you to use them. Global companies with complex offerings increasingly use video too. It simplifies and informs like nothing else. Use print for facts. Video for connection.

Businesses that serve the world need to look the part. Don’t just show your aircraft flying over Lake Powell. Show different ethnicities, locales, genders and ages. NBAA reports attendees from 96 countries. There’s a good reason why you see maps in many booths. Aircraft manufacturers and major suppliers continue to tap into big-name entertainers for their private after-hours events. (I was more than a little envious to have missed seeing Keith Urban.) And, it’s always fun to see entertainers such as David Copperfield walking through the static display. Singer-songwriter and pilot Dierks Bentley captured the attention of the opening-session crowd and generated considerable social-media buzz. Bombardier made the best use of star power with business jet user,advocate and pilot William Shatner. He helped launch Bombardier WAVE, high-speed Wi-Fi service for Bombardier’s Global family of aircraft. Star Trek’s former Captain Kirk gave the system a first-time trial as he flew into Vegas for the NBAA convention. In addition to coverage by the aviation trades, social media further magnifies the spokesperson role. You can read Shatner’s personal posts on Twitter and watch his demo on YouTube.

By the time cocktail hour arrives, attendees need a pick-me-up. Feet ache. Backs hurt. Come 4 p.m., you see a definite shift in the flow of booth traffic. People migrate to those exhibitors with drinks and hors d’oeuvres. BBA Aviation’s happy hour is always one of the highest attended. It brings the show day to a nice, social conclusion.